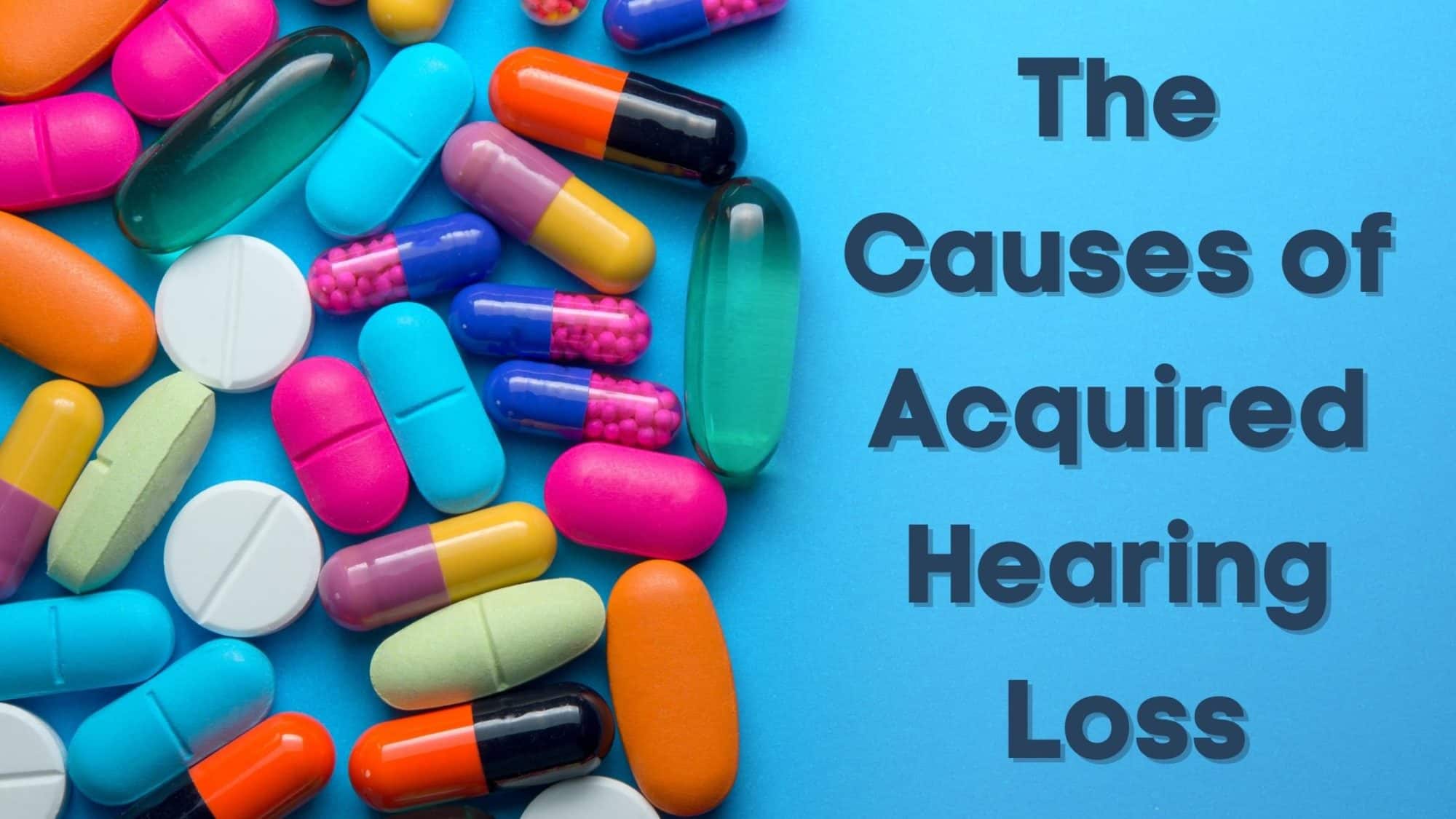 Hearing loss can affect people of every age. The rate of congenital deafness, or hearing loss at birth is relatively low, just about 2 or 3 of every 1,000 American children. However, that number increases in American adults, with 15% of those 18 years or older reporting hearing loss in one or both ears. This type of hearing loss, that which occurs after birth, is referred to as acquired hearing loss.

There are many causes for acquired hearing loss, most of which are associated with an illness or injury.

Ear infections occur when fluid trapped in the middle ear — the space behind the eardrum — becomes infected. This is usually due to poor drainage in the Eustachian tube which connects the inner ear to the throat. Ear infections are most common in children, because the eustachian tube does not tilt at an angle, the way it does in adults.

Children may experience hearing loss because of untreated or repetitive ear infections. If your child is tugging at their ears, feverish, difficulty sleeping through the night or unresponsive to sounds, you should see a doctor about a possible ear infection.

Meningitis is an infection, most often viral but sometimes bacterial or fungal, that causes inflammation of the brain and spinal cord membranes. Because of successful vaccines, the rate of meningitis in the United States is rare. That said, meningitis is one of the leading causes of acquired hearing loss, as 8% of meningitis survivors are left with some type of permanent hearing loss.

Measles are a viral infection spread through the air by respiratory droplets with serious implications for small children. It begins with flu-like symptoms with a red rash emerging after a few days. While there is no cure for measles, cases of this disease are extremely rare in the United States because of successful vaccines. Less than 1,000 cases occur annually. Beyond measles itself, several medical complications can arise after contracting this disease, including severe ear infections which can lead to permanent hearing loss.

Encephalitis is most commonly caused by a viral infection which results in inflammation of the brain. Mild symptoms, like a headache, occur most frequently, but encephalitis can also cause confusion, vision problems and epileptic seizures. It’s considered a rare disease in the United States, with 200,000 or fewer cases occurring annually. It’s caused by infected insects or animals transmitting the virus via biting or stinging.

The vaccine for chickenpox is relatively new, being approved for use in 1995 in the United States. Before the vaccine was available, there were approximately four million cases annually. Now, post-vaccine, there are less than 200,000 on an annual basis. Chicken pox, a viral infection, is highly contagious and appears as an itchy rash on the skin. In those over 60, the chicken pox can emerge as shingles. Adults who had chicken pox in childhood have some immunity towards shingles, but there is also an available shingles vaccine.

While hearing loss as a result of chickenpox in children is rare, this virus can also reactivate in adults in Ramsay Hunt syndrome. Though an uncommon illness, this disease affects inner ear and results in a rash on the eardrum, earlobe or ear canal.

The flu is a very common illness, with more than three million cases annually in the United States. While widespread, it can be very serious for people with weakened immune systems, young children and older adults. A vaccine is available, which might result in some protection, including immunity or lessened symptoms. Because the flu attacks the lungs, nose and throat, hearing loss can occur during the illness. This happens when the eustachian tubes are blocked due to increased congestion. Most hearing loss is mild and full hearing will return after the illness is over. However, in extremely rare cases, the nerves of the auditory system are impacted and some hearing damage can be permanent.

Also preventable by vaccine, mumps is now a very rare viral infection that causes swelling in the parotid glands and results in a puffy appearance of the jaw. Symptoms include fever, headache, fatigue, loss of appetite and painful, swollen salivary glands. Hearing loss can occur because of damage to the inner ear and almost always affects just one ear that can be temporary or permanent. Around 1 in 20 people with mumps also experience hearing loss.

More than 200 medications are known to cause hearing loss, resulting in either temporary or permanent hearing loss. Your physician or healthcare team will have been aware of these side effects at the time of prescribing and should inform you of the risk. If you begin a new medication treatment and notice a loss of hearing, you should immediately contact your physician to alert them of this result, pausing the medication only under advisement. If you are unsure if any medications you are currently taking are known to be ototoxic a quick internet search will give you more information. You might also consult your pharmacist.

Because so much of our sense of hearing happens in the brain, trauma to the brain can result in differing degrees of hearing loss. Physical injury to the ear itself, particularly the delicate architecture of the inner ear, can also result in hearing loss. These injuries might cause temporary or permanent hearing loss, but they will usually occur quite suddenly at the point of injury rather than over time. If you are experiencing hearing loss after a physical injury, immediately contact your physician or a healthcare provider.

Noise is one of the leading causes of hearing loss. This can happen suddenly, in an extremely loud noise event, like a car accident or explosion. Loud noises can also cause slow damage over time that causes significant long-term hearing loss. This is common in certain types of careers, like the military or construction work. Noise-related hearing loss is irreversible and people with regular exposure to loud noises should schedule regular hearing tests and try preventative measures, like hearing protection to reduce harm.

There are many different ways in which our hearing might become damaged over the course of a lifetime. By way of illness, hearing might be restored once you are fully recovered. However, irreversible hearing loss is treatable. While you might not retain your previous degree of hearing, there are options available to help you cope with hearing loss and technologies on the market to advance your hearing experience. Schedule an appointment with us today to address your hearing health and learn more about treatment options available to you!