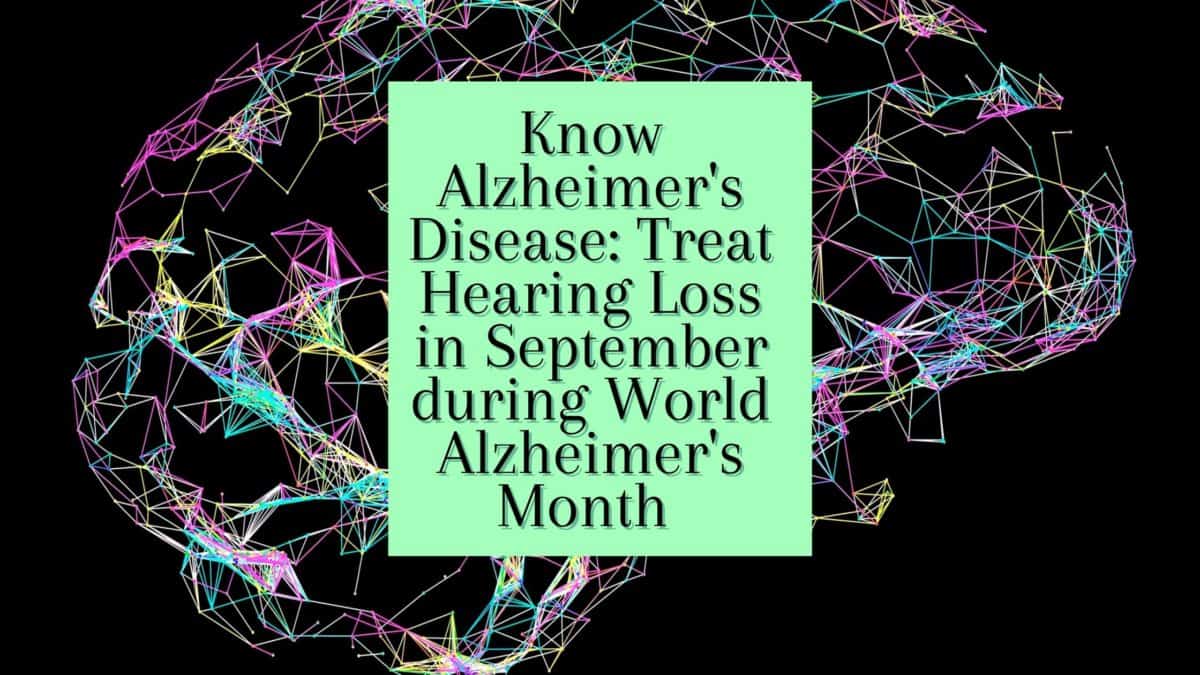 September is World Alzheimer’s Month! Launched in 2012 by Alzheimer’s Disease International,  this global campaign focuses on raising awareness and destigmatizing dementia so that there is greater access to resources. Dementia refers to a group of medical conditions that lead to the deterioration of cognitive functions like memory, thinking, and decision making. This reduces a person’s capacity to manage and perform daily tasks and navigate life independently. Alzheimer’s is the most common form of dementia, accounting for 60%-70% of all cases.

Currently, 50 million people live with dementia worldwide and there are 10 million people diagnosed every year according to the World Health Organization. Because exact causes of Alzheimer’s are unknown, identifying and treating risk factors is a critical way to reduce the risk of its development. Research shows that hearing loss can accelerate cognitive decline and by treating it, you can improve brain health; reducing the risk of Alzheimer’s Disease.

What is Alzheimer’s Disease?

Alzheimer’s disease is a progressive condition that leads to the decline of essential cognitive functions related to thinking, memory, and language. It typically begins with mild memory loss and can escalate to inability to carry out daily tasks, recognize familiar people, and participate in conversations. According to the Alzheimer’s Association:

As the condition progresses, people can experience major personality changes, social life withdrawal, and the need for assistance in daily life. Exact causes of Alzheimer’s are unknown so there is emphasis on identifying factors that can increase the risk of its development. One of the risk factors that research has established as being correlated to Alzheimer’s is hearing loss.

Hearing loss is the third most common, chronic medical condition that people experience today. Nearly 1 in 5 people have some degree of impaired hearing. Both Alzheimer’s and hearing loss disproportionately impact older adults and extensive research examines how they overlap. There are numerous studies that highlight the link between hearing loss and cognitive decline, revealing that impaired hearing increases the risk of developing dementia.

A major study that examines this relationship was conducted by researchers at Brigham and Women’s Hospital and Harvard Medical School. Published in 2019 in the Journal of Alzheimer’s and Dementia, the study involved analyzing data of self-reported hearing and cognitive capacities of over 10,000 people over an 8 year period. Researchers found that among people with hearing loss, cognitive decline was:

Treating hearing loss is an important way to improve your overall health. Not only does treatment lead to better hearing, but also numerous benefits that are life changing. This includes improving brain health which reduces the risk of developing Alzheimer’s. The most common treatment for hearing loss is hearing aids – electronic devices that are designed to absorb, amplify, and process sound. These instruments maximize hearing which strengthens communication. Hearing aids improve cognitive functions by supporting the areas of the brain responsible for sound and language.

Prioritize your hearing health during World Alzheimer’s month by scheduling an appointment for a hearing test. A hearing test is the first step in treating hearing loss and transforming your health. Conducted by a hearing healthcare provider, hearing tests are noninvasive and painless! Establishing your hearing needs and treating any degree of hearing loss offers countless benefits. Strengthened communication improves relationships, social life, daily wellness, and overall health – including brain health which reduces your risk of cognitive decline.