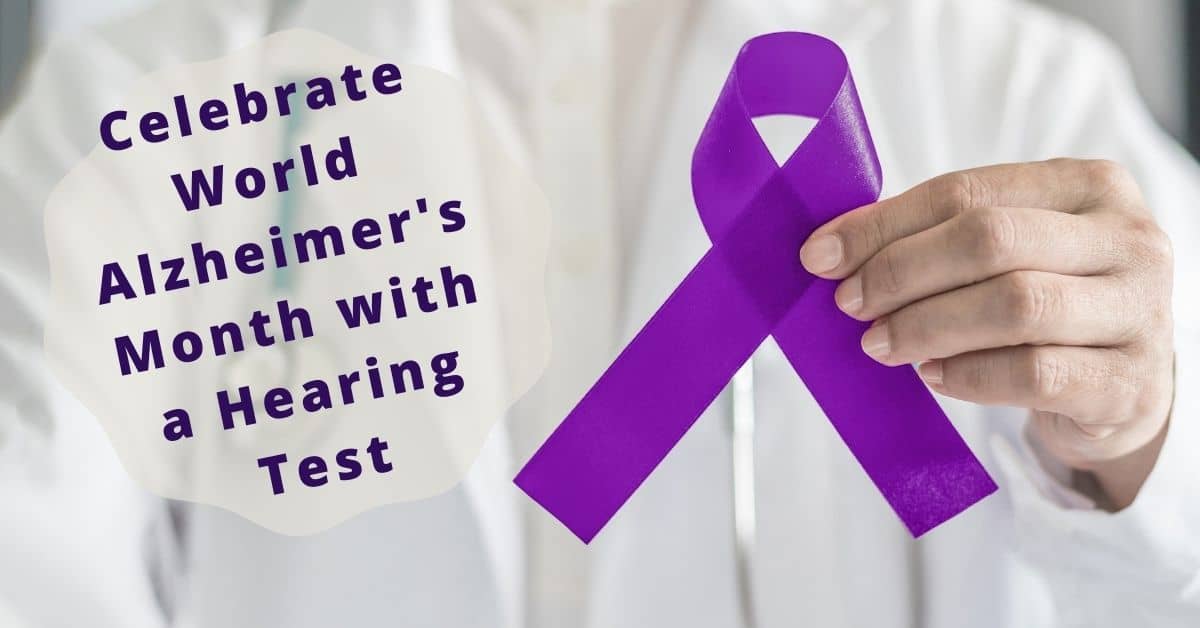 September is World Alzheimer’s Month! This global campaign focuses on raising awareness, addressing misconceptions, and destigmatizing dementia. Dementia refers to several medical conditions that are characterized by cognitive decline: deterioration of memory, language, problem solving, critical thinking abilities. There are several types of dementia including Parkinson’s, Huntington’s, vascular, and Alzheimer’s disease. The most common form, Alzheimer’s disease, impacts nearly 6 million people in the U.S. and accounts for 60-80% of all dementia that people experience.

Alzheimer’s is a gradual disease that can start with mild memory issues and become profound inability to remember people, information, and communicate. Currently, there are no cures so ways to prevent or delay its development is critical. Research has established hearing loss as a contributing factor which amplifies the importance of prioritizing your hearing health!

A common health condition, hearing loss results in the reduced ability to absorb and process sound. This can be caused by a variety of factors including medical conditions such as cardiovascular disease and diabetes, environmental exposure to loud noise, and genetic history. According to the National Institute on Deafness and Other Communication Disorders:

These statistics underscore that hearing loss is the third most common chronic health condition that older adults experience. Impaired hearing produces a range of symptoms including:

These symptoms can be mild to severe and really impact how one navigates various environments. Hearing loss strains communication, effecting job performance, relationships, and social life. Untreated hearing loss can worsen symptoms in addition to contributing to the development of other medical conditions including Alzheimer’s.

Studies have established a significant correlation between Alzheimer’s and hearing loss. Hearing loss not only contributes to the development of Alzheimer’s but the severity of hearing loss accelerates cognitive decline. Various research share these findings including a major study published in 2019. Conducted by Brigham and Women’s Hospital and Harvard Medical School, researchers found that cognitive decline which was:

These staggering statistics show that hearing loss is a significant factor in the development of dementia. Researchers have suggested that hearing loss impairs parts of the brain that are responsible for our auditory system (which is how we hear). Brain cells involved in muscle control and sensory perception may be less active and this inactivity could impact cognitive functioning.

Identifying and treating hearing loss can reduce your risk of cognitive decline as well as improve your overall health.

Taking a hearing test is the first, and most important step in prioritizing your hearing health which is integral to maintaining your well-being. Hearing tests involve a painless and relatively quick process that measures your hearing ability in both ears.

Administered by a hearing healthcare specialist, hearing tests determine any impairment, the degree, and specific type of hearing loss you may by experiencing. Luckily, there are effective ways that hearing loss is treated. The most common treatment is hearing aids which are small, electronic devices designed to help absorb and process sound.

This increases one’s ability to hear which has numerous benefits including strengthening communication, improving relationships, enhancing social wellness, boosting confidence and sense of independence. It also reduces your risk of developing other medical conditions including Alzheimer’s disease.

A great way to participate in World Alzheimer’s Month and care for your health is by taking the easy step of scheduling an appointment for a hearing test!